I’ve watched enough videos on Youtube to know that the sign of a good macaroon is the presence of “feet” (or, as us regular people know them as, those ridge things at the bottom of the cookie 😉 ) and I was so excited to see that mine had feet!

For those of you who have never had a French Macaroon, they’re VERY similar to meringue cookies.  They’re pretty good, I must say 😉 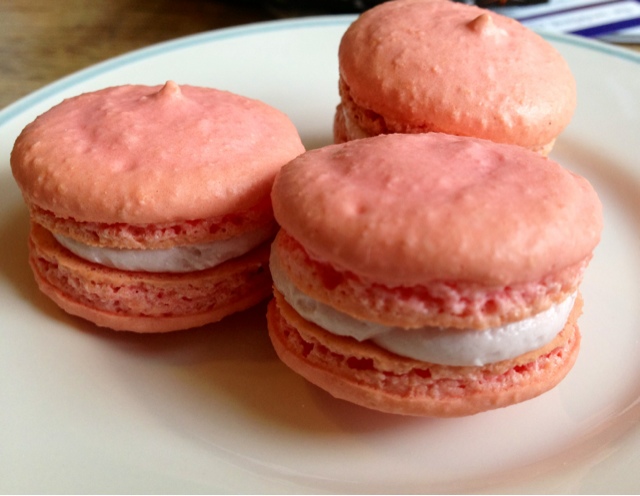 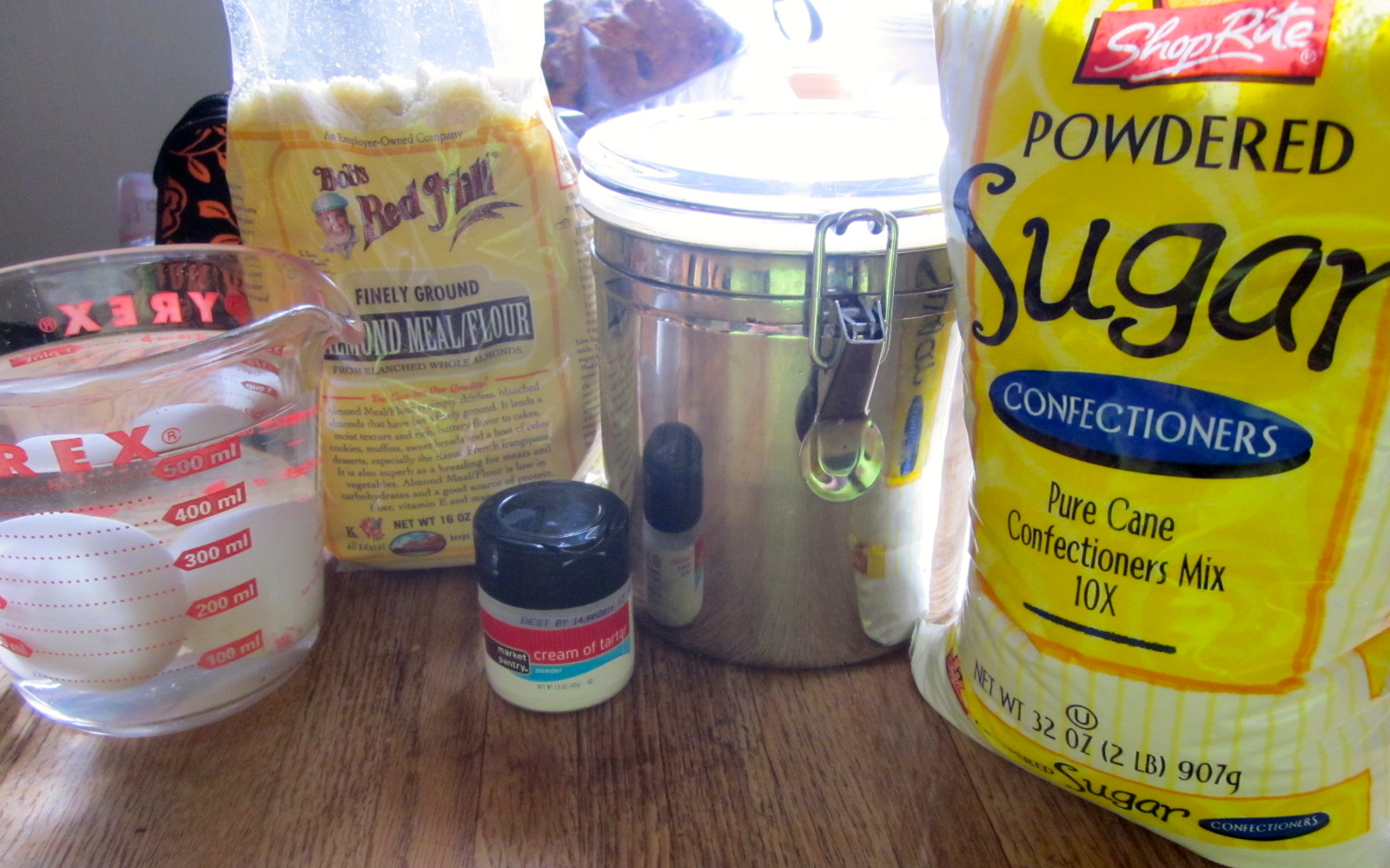 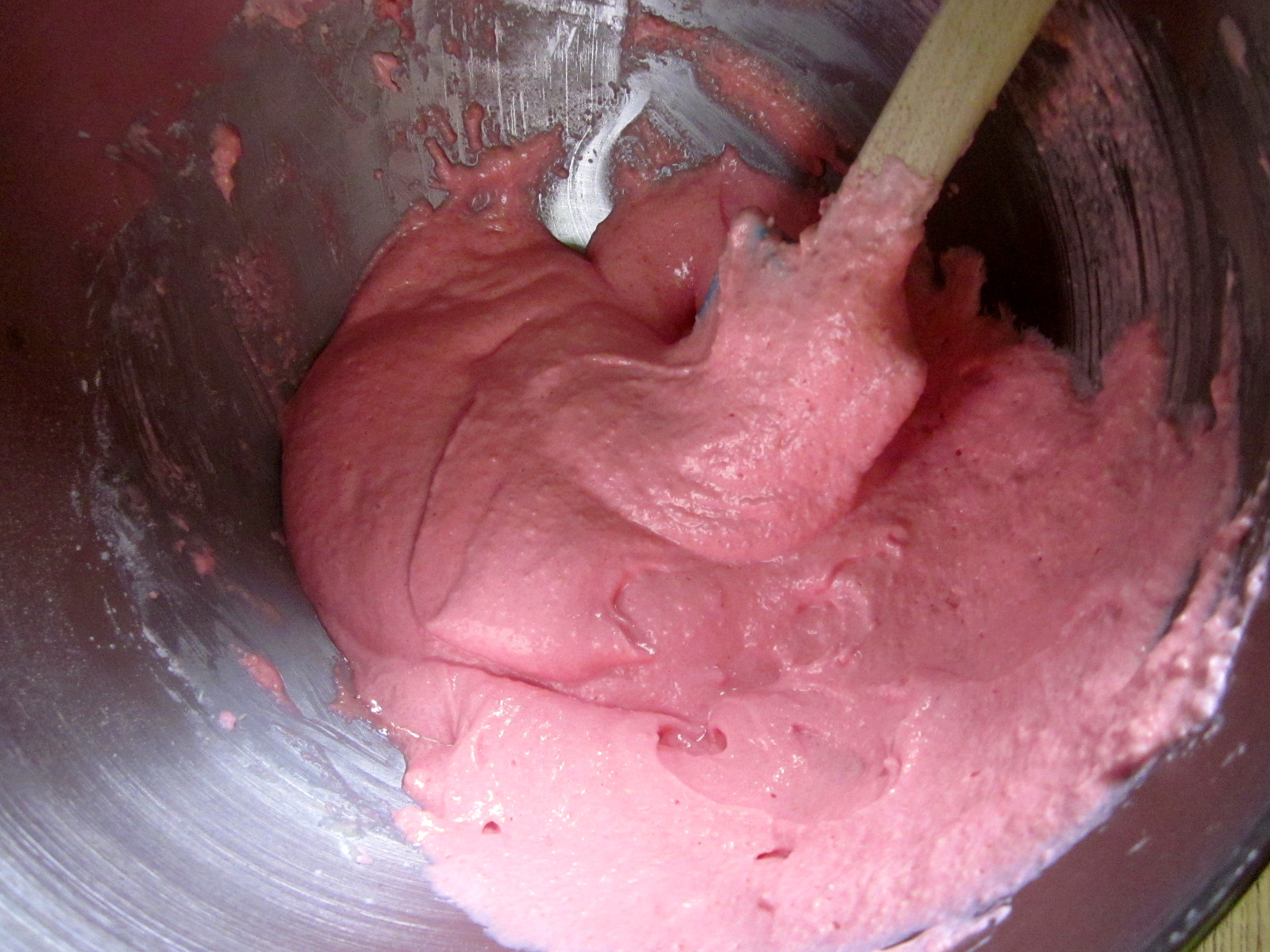 How the dough looks after the food coloring has been added & when it’s ready for piping. 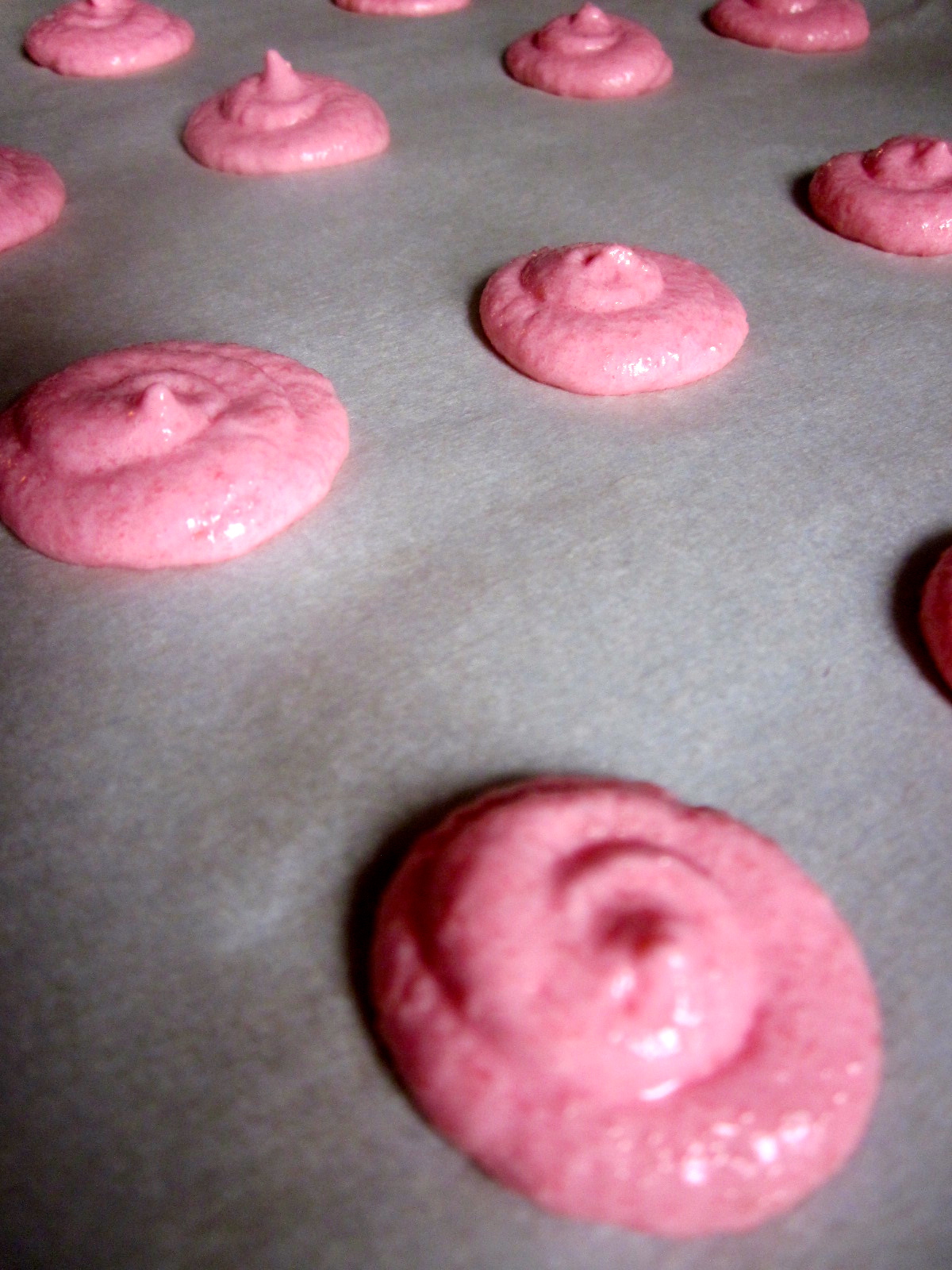 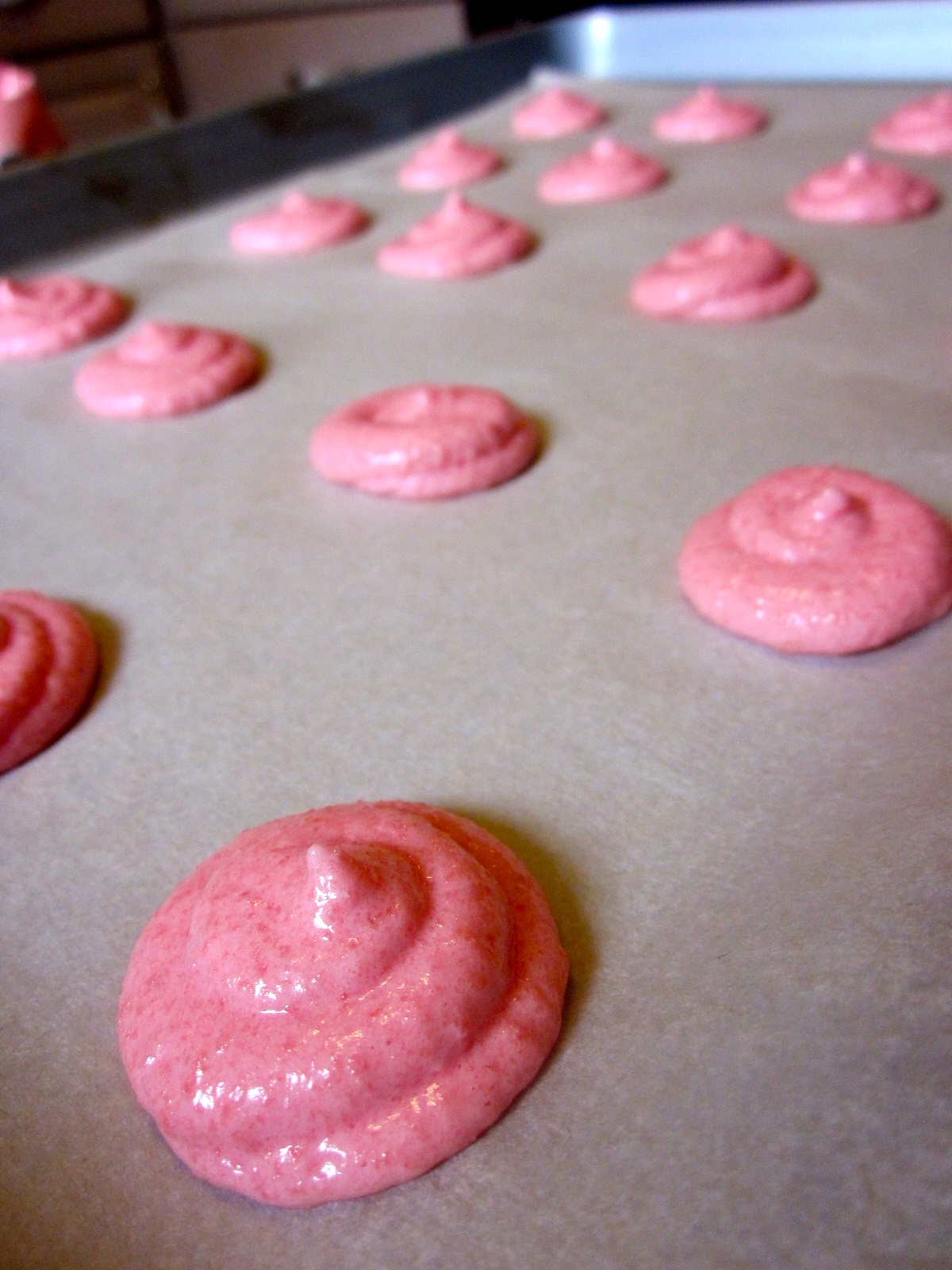 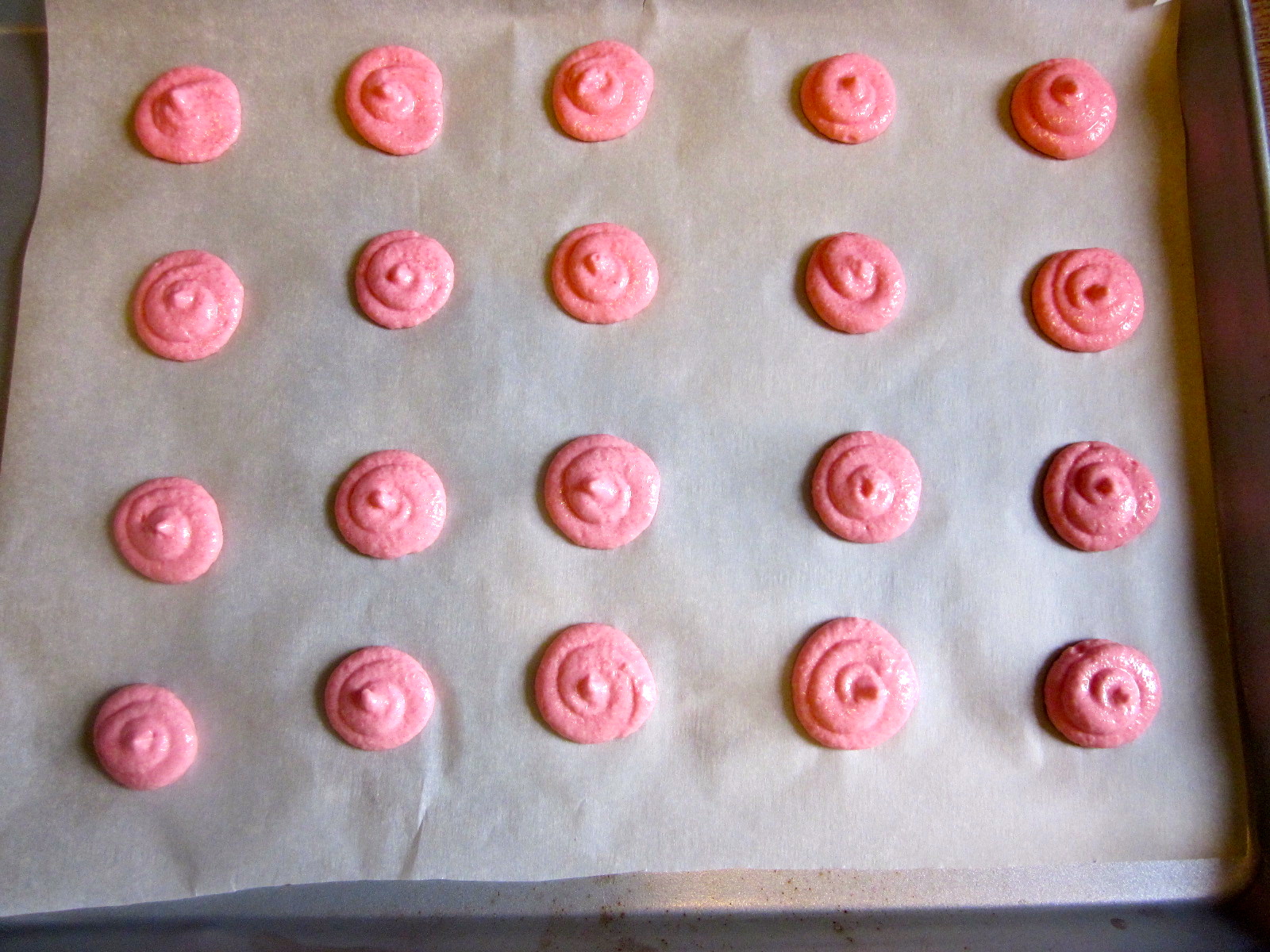 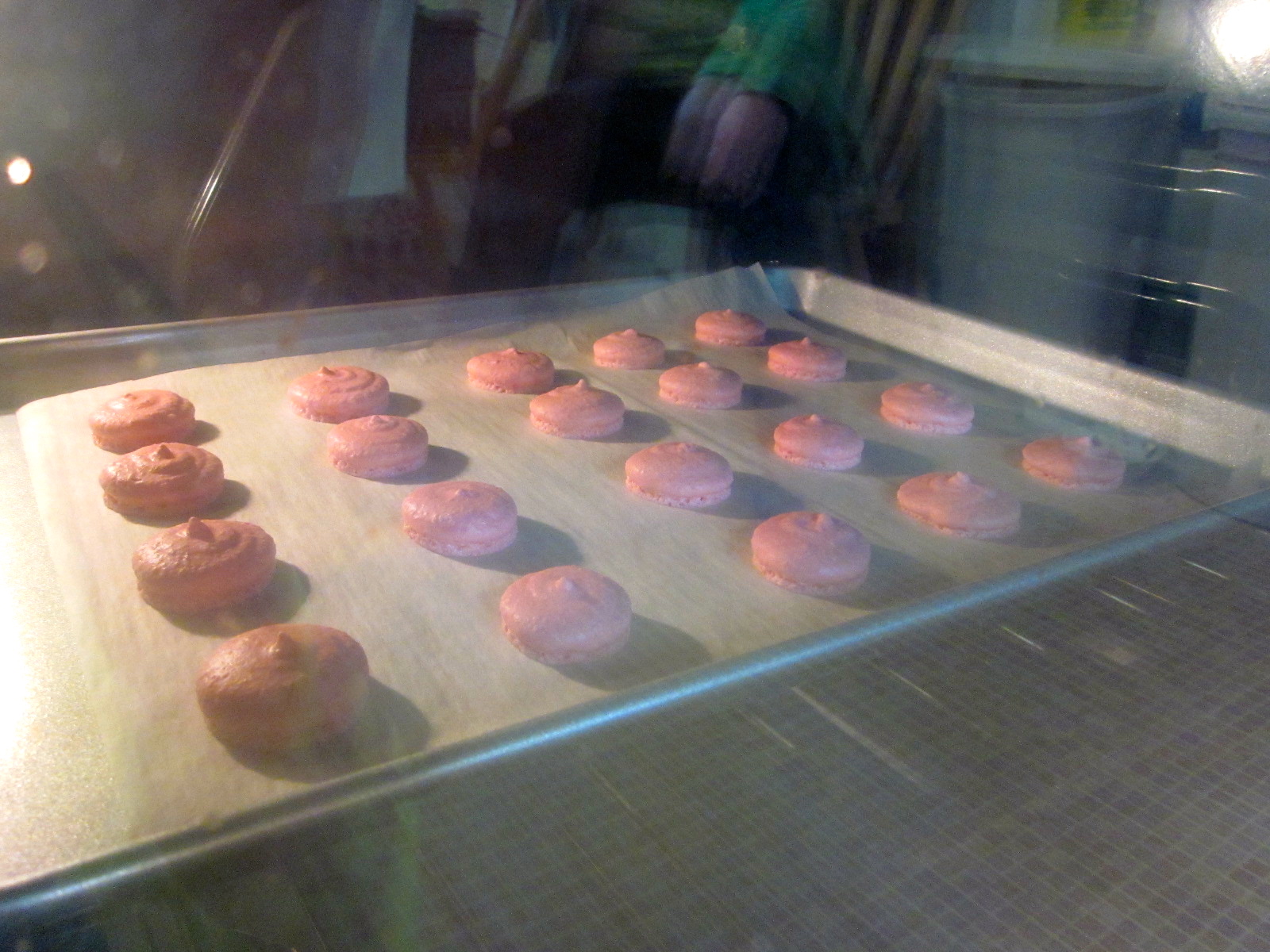 I was so excited when I saw feet that I had to take a picture!! 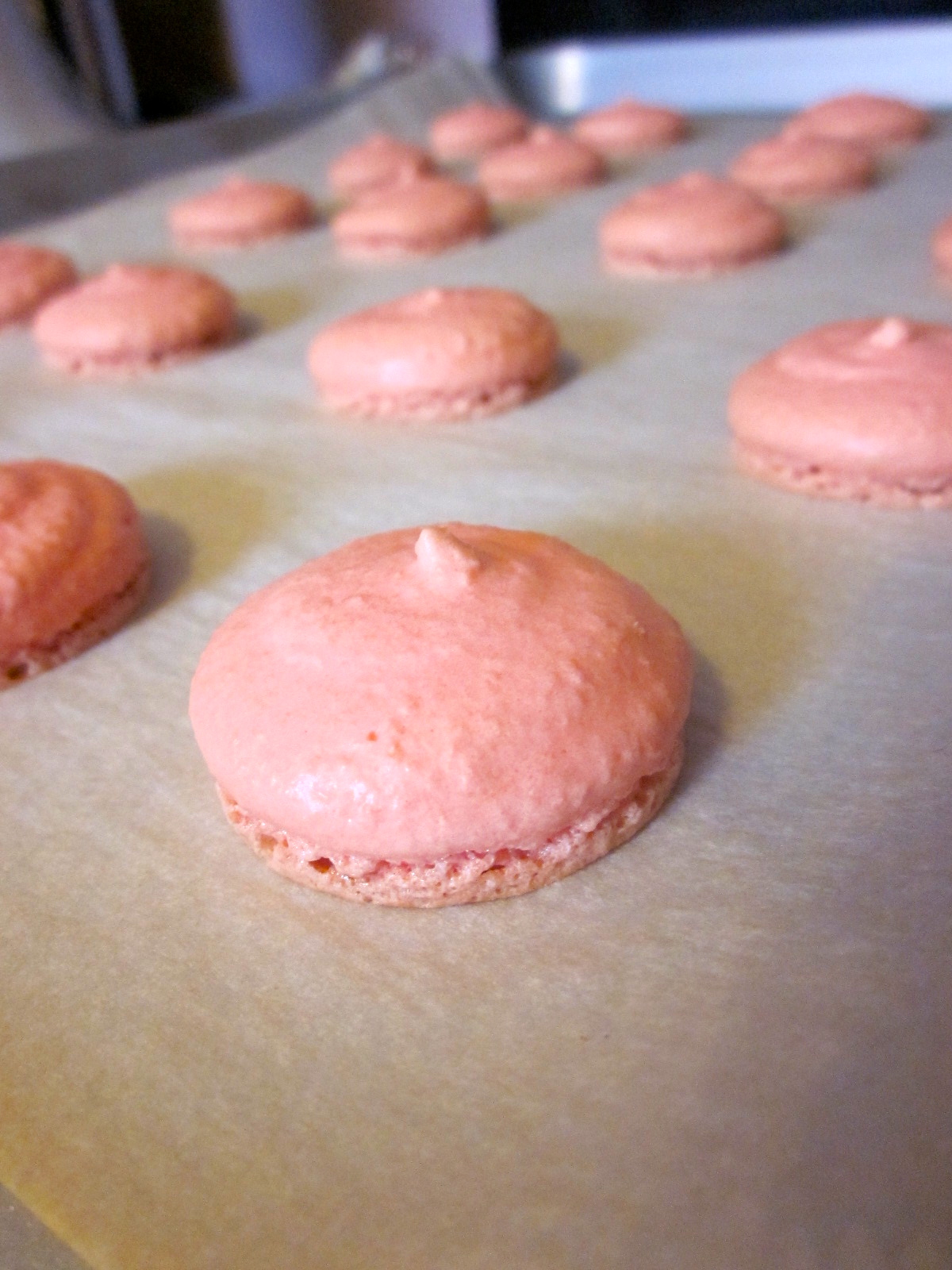 Once they came out of the oven 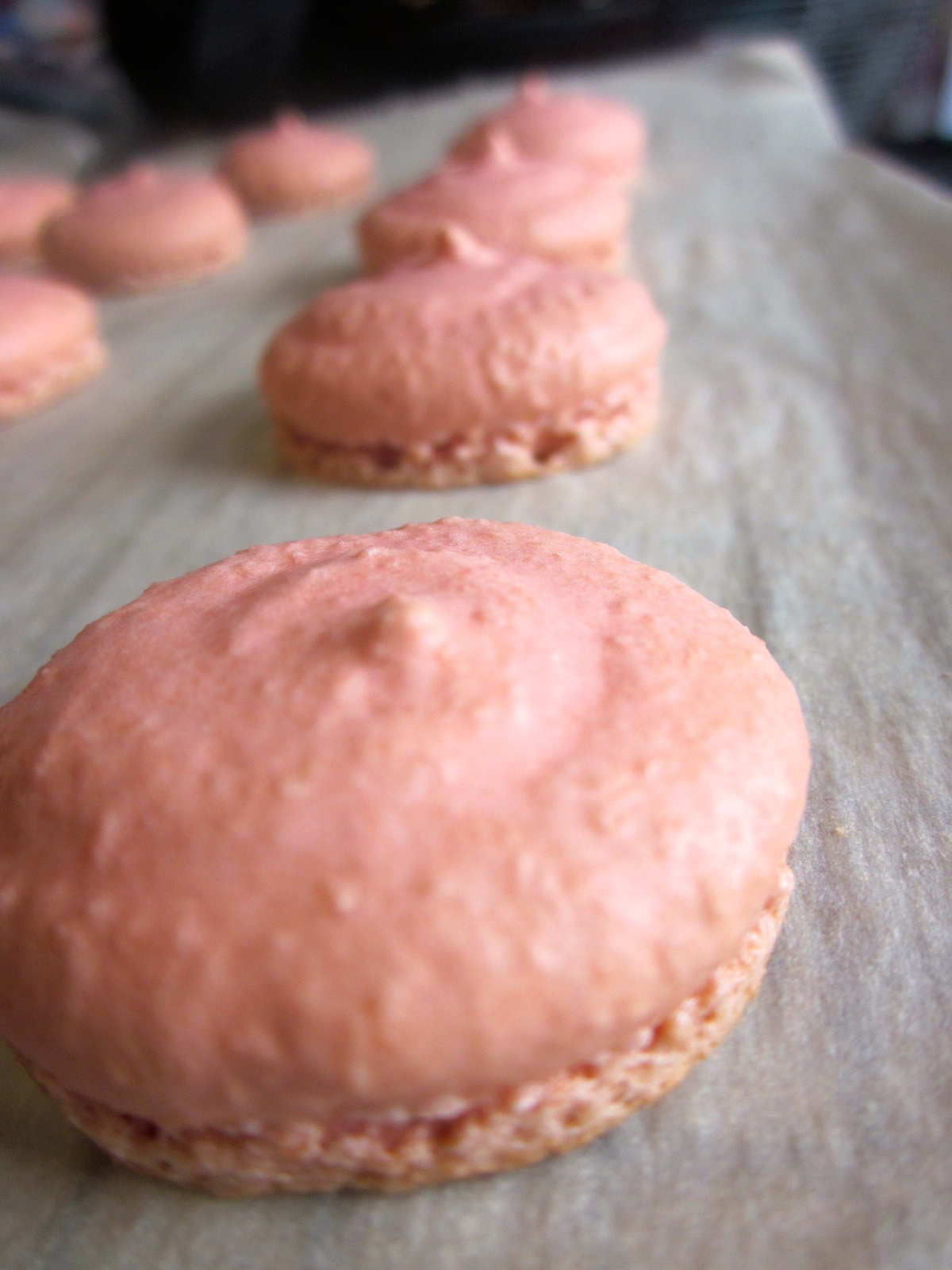 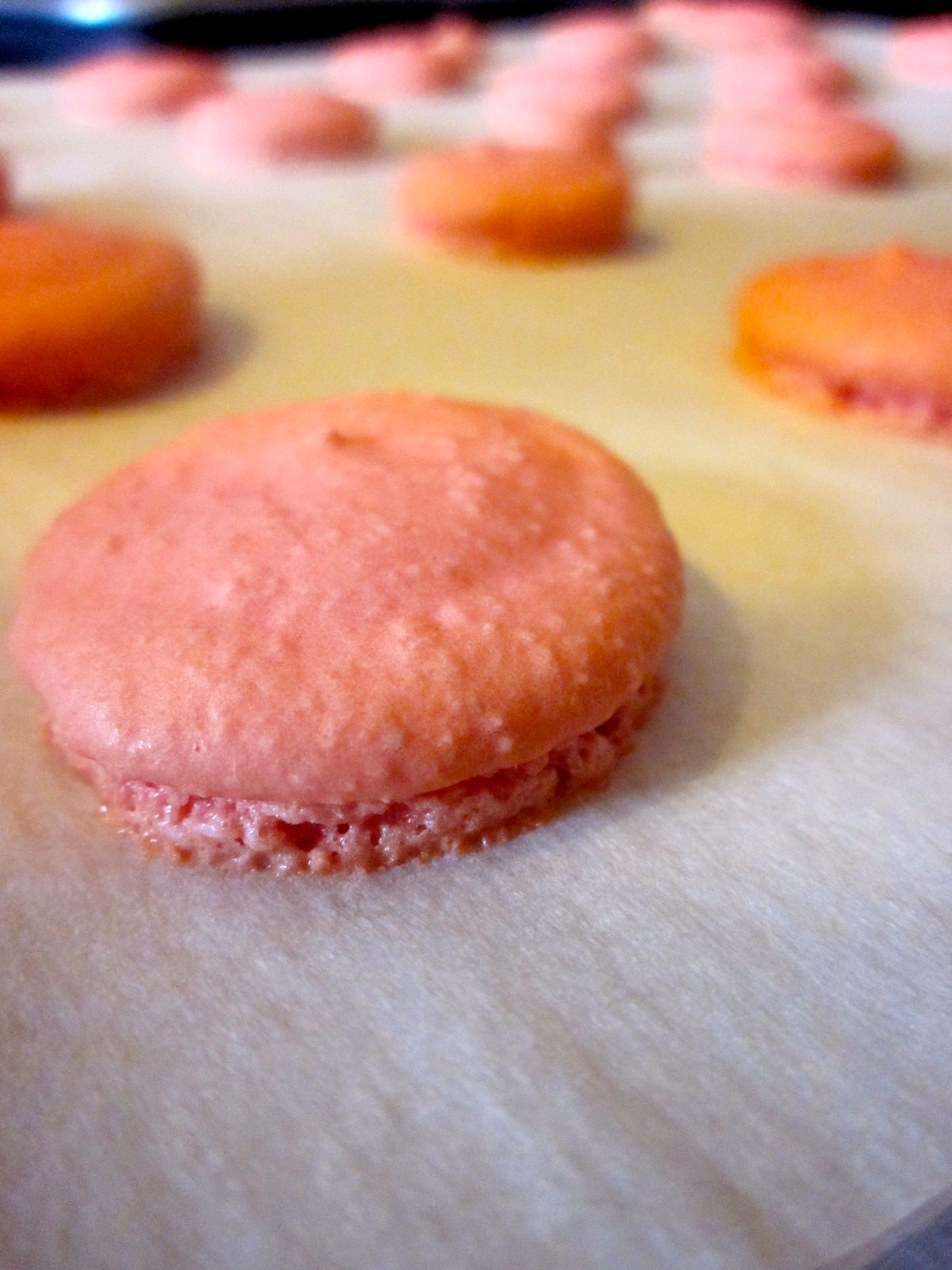 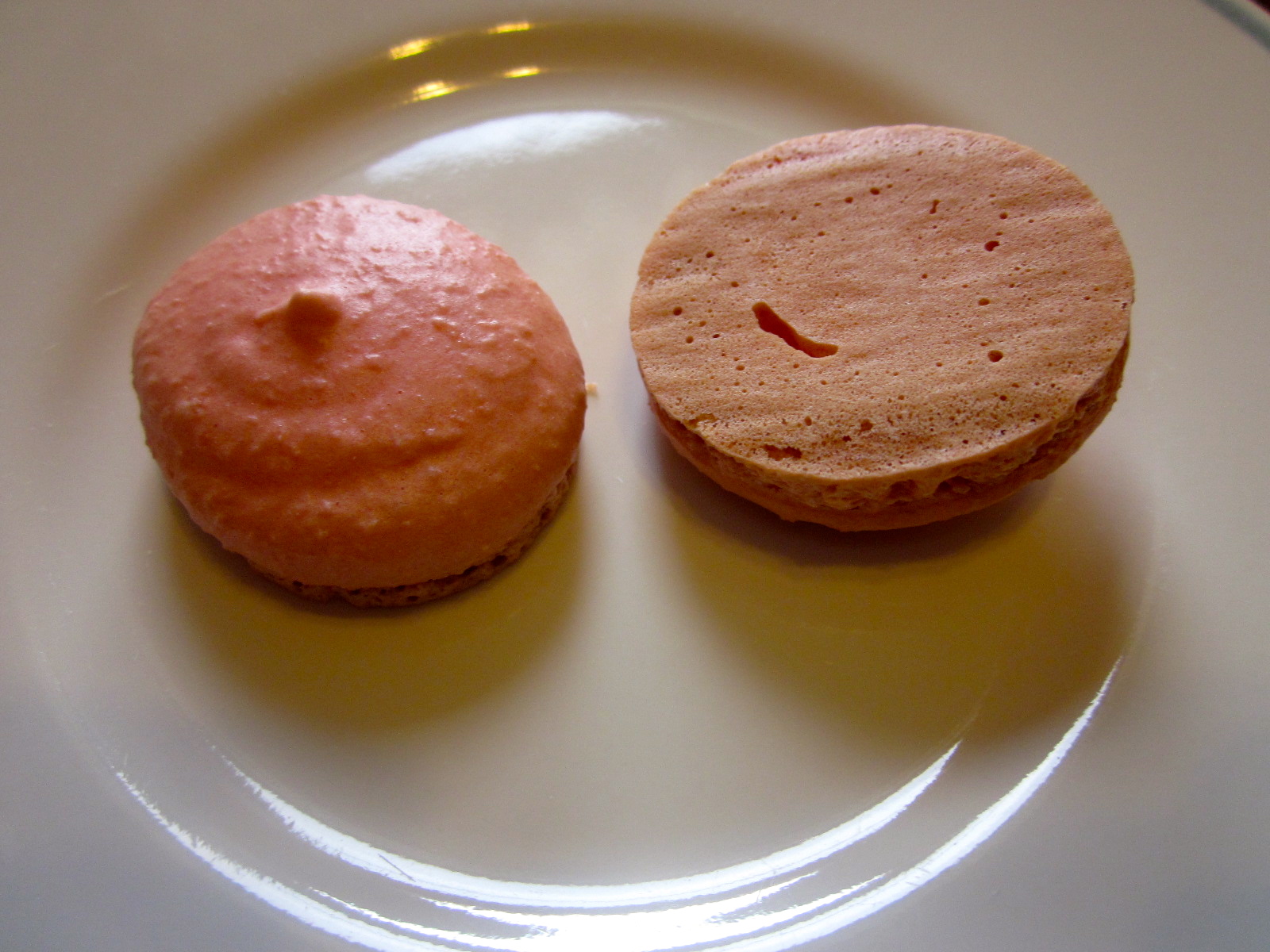 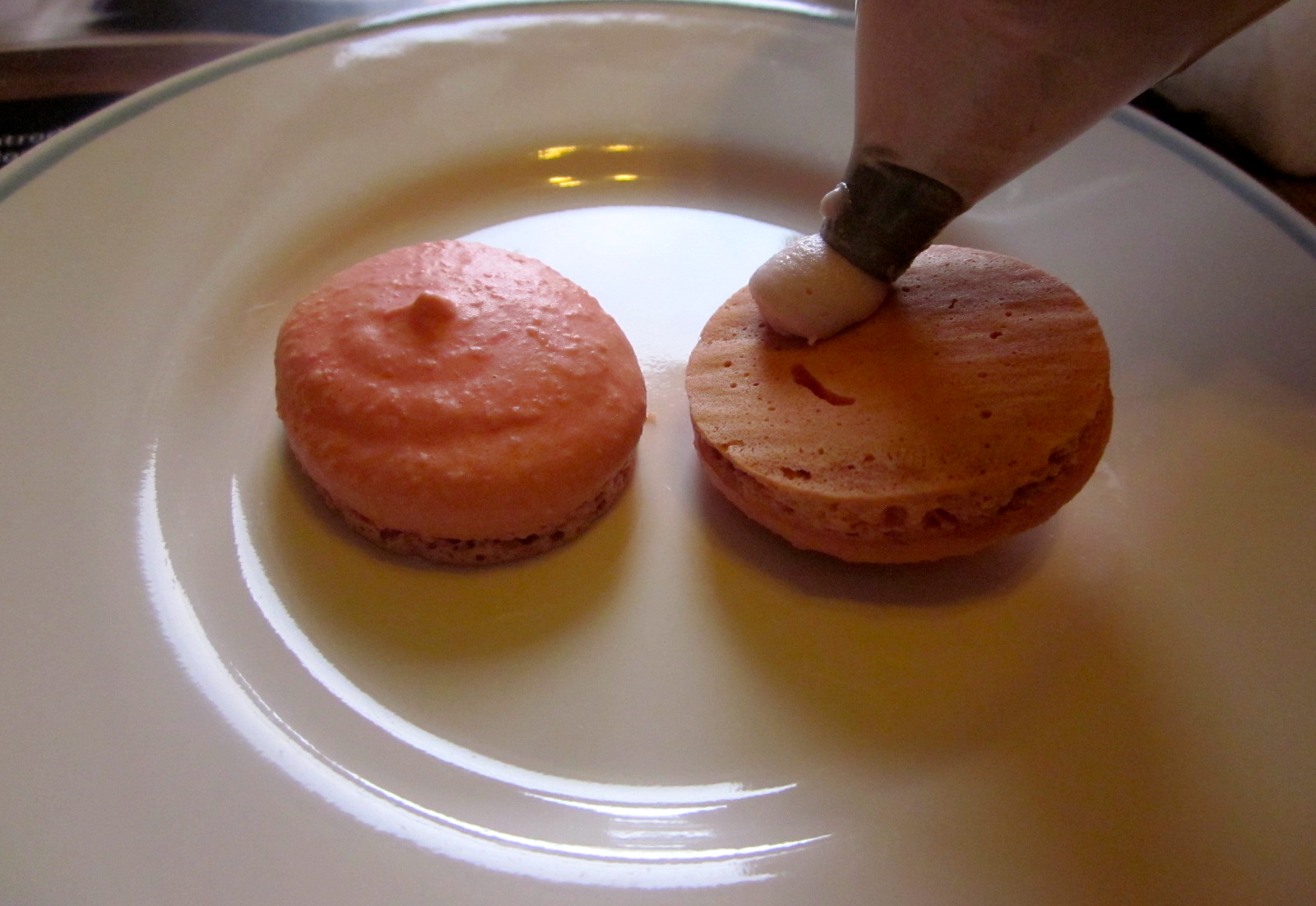 Just pipe it on! 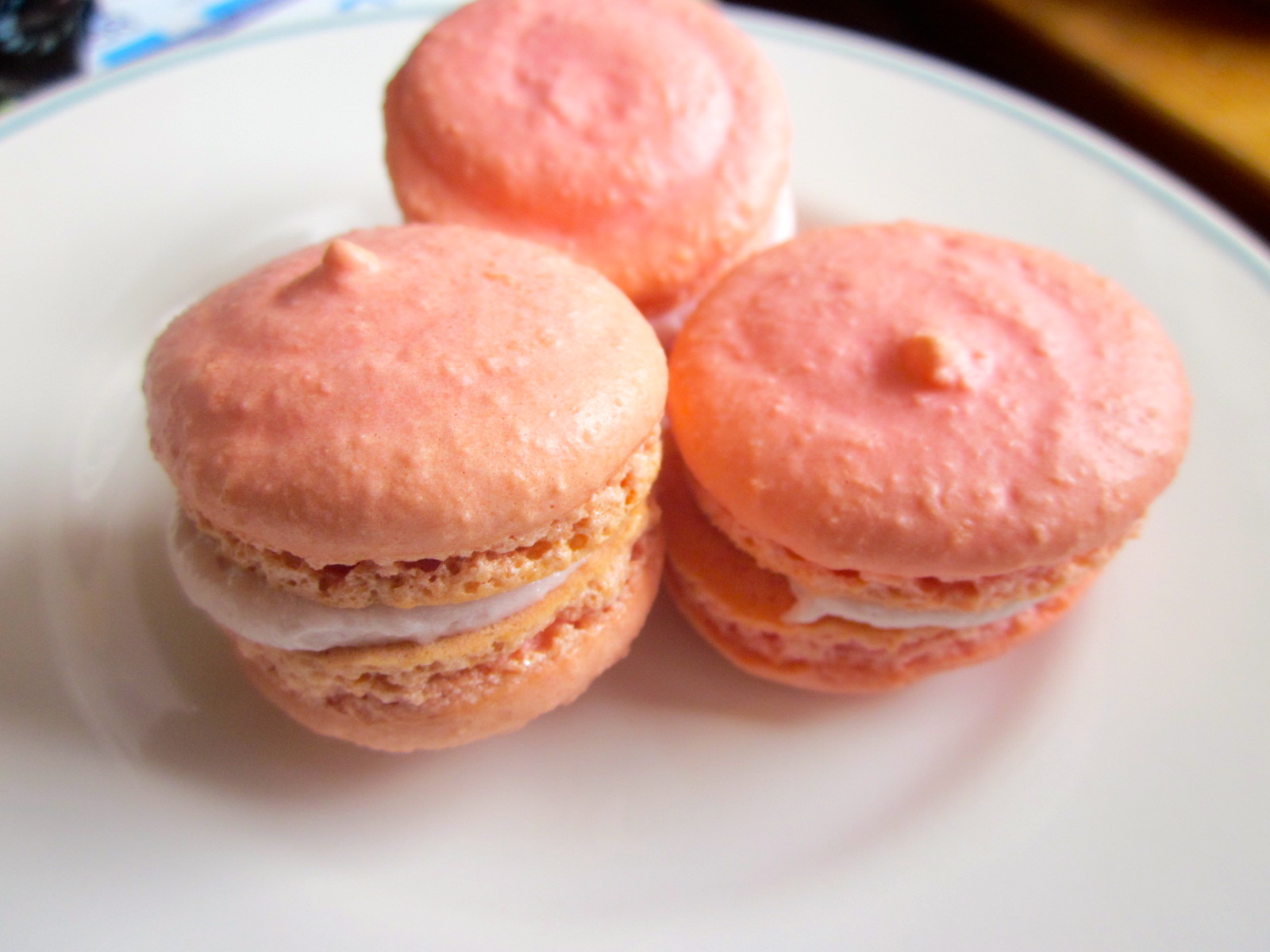 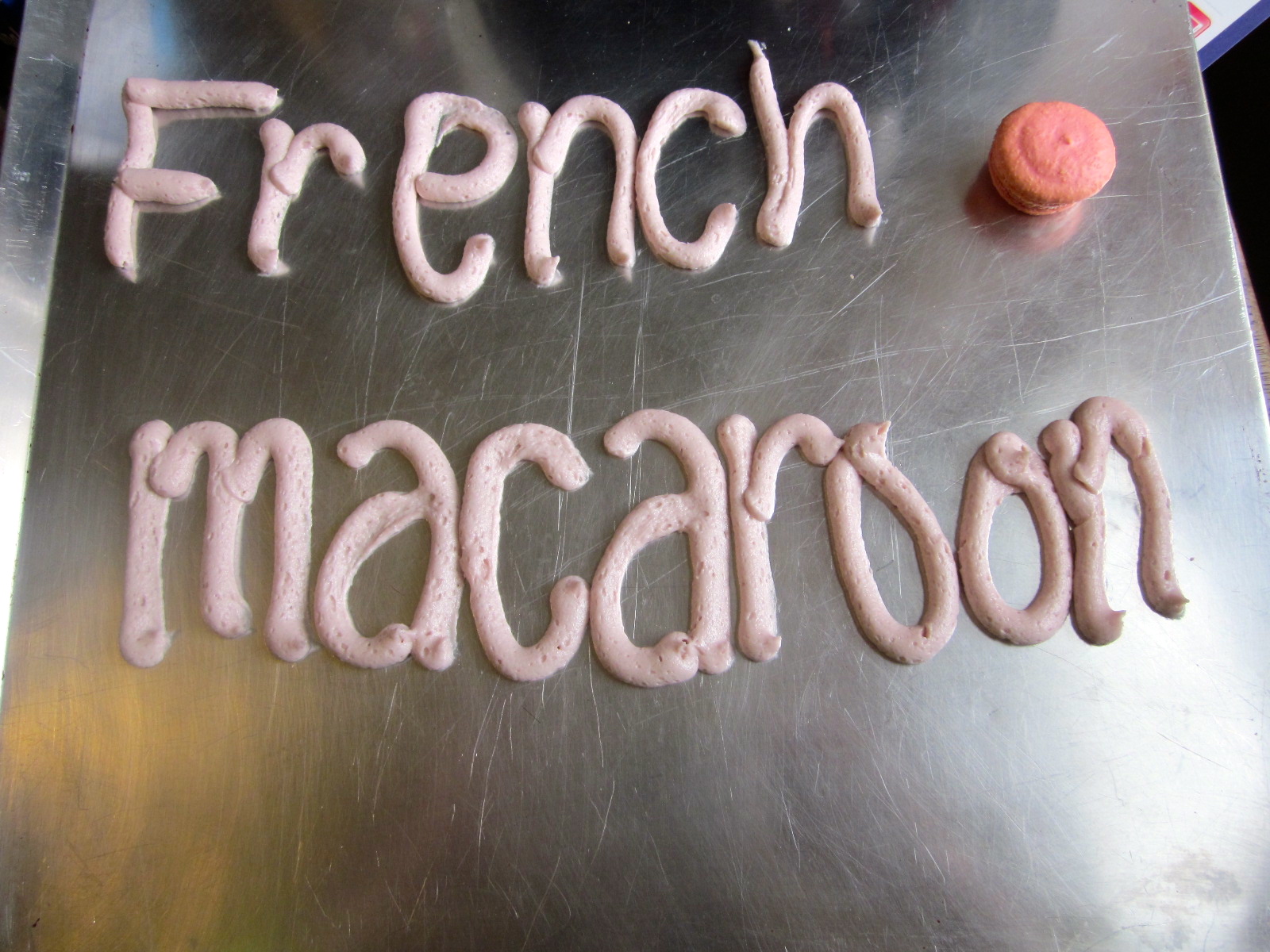 Recipe: via tips via

Pinch of Cream of Tartar

1/4 Cup Sugar (TIP: Sift sugar prior to putting it in mixture- thats what I did- or send it through a food processor to break it up more. Mine still looked a little grainy, which could be because the sugar was too big)

1. Sift together almond flour, and confectioners sugar- set aside.

2. In a stand mixer, beat egg whites until foamy, then add cream of tartar and continue mixing until soft peaks begin to form. Then add the sugar and mix until stiff peaks form.

3. Once the egg mixture if beaten, take it off the stand mixer and fold in the flour mixture. This is a very important step, over/under mixing will not get the desired consistency of cookie. Mix just until the “dough” is smooth and the batter drips off the spoon in clumps.

4. Put batter into a piping bag and pipe out 1 inch circles onto a parchment paper lined cookie sheet

5. Bang the cookie sheet against the counter/table to remove all of the air bubbles and peaks.

7. I experimented with time and found that the best time was 7:30 seconds on each side (just flip the cookie sheet to the other side for even baking). Do one tray at a time only.

8. I followed the recipe above with temperatures: 375 degrees until the cookies go in, then reduce it to 325 degrees – I did this for each batch. (So I set the oven for 375, then, when I put the first tray in I reduced the temperature to 325. Once the first batch was done, I put the oven back up to 375 and waited until the oven beeped at 375, then I reduced it to 325 and put the second batch in, and so on and so on.. any questions feel free to email or comment here- it sounds confusing-sorry!)

less than a pinch of salt

1. In a stand mixer, whisk together the butter and vanilla extract until creamy.

2. Add the confectioners sugar a little bit at a time

3. Add the jam of preference, the milk, and the salt

4. I like to let the mixer do its thing for a while so the buttercream is extra light and fluffy (mmmmmmm)

5. Once the buttercream is all mixed, put it in a piping bag and pipe it onto the cookie!

P.S: I just used a plastic bag and cut a hole in the corner (you really dont even need decorating tips) for both the buttercream and the cookie.

Thanks for stopping by!!